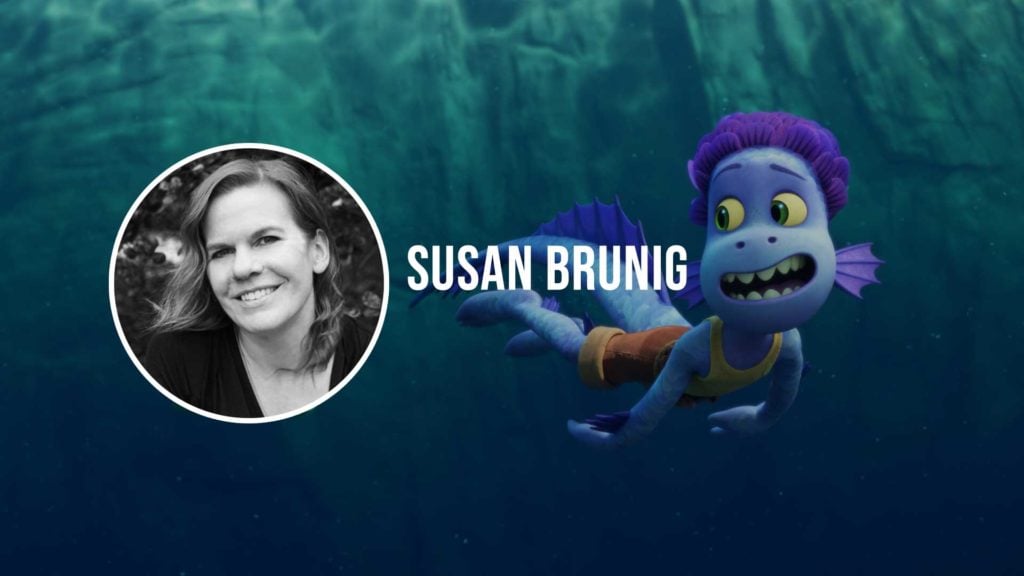 Artist in the Spotlight: Susan Brunig

Pixar films offer best-in-class storytelling and visual delight. Every single frame that comes out of Pixar goes through Susan Brunig and her team, so if you want to learn a colorist’s craft, it’s Susan you should turn to.

“I work on a team called Studio Mastering,” Susan explained to us as we chatted over Zoom. “We do the final color pass on the movie and we’re responsible for distribution”.

After 15 years at Pixar, Susan is a master colorist, and has worked on every single film released by the company since 2007’s Ratatouille.

It would be fair to say that Susan’s at the top of her game, which is why we were so thrilled to jump on a video call and pick her brain about the ins and outs of her job. Her key piece of advice for anyone wanting to get a start in post-production? Stay on top of technology, and have a firm foundation in storytelling.

But more on that later…

The story starts with a fortuitous meeting

After finishing film school, Susan took on various jobs in post-production houses in San Francisco, working in distribution and as a tape operator. She was happy with her work, not even looking for a career change.

Then, she tells us, one day she ran into a friend of a friend on a BART train. This person knew a person who was looking for an assistant at Pixar. Because intros like that don’t come around too often, Susan followed the lead. Nine interviews later, Susan was hired for the two-month temp position –– and has been there ever since.

As with many professionals in the film industry, Susan worked as an assistant for several years while developing her skills, then worked her way up to color grading. One of her favorite projects during her time at Pixar has been the SparkShorts Program.

Directors in the studio were given the opportunity to develop short films on a limited budget, in a six-month period. Susan began grading these shorts as the lead colorist. “Because I cut my teeth on the SparkShorts as far as working as a colorist, they are the closest to my heart”, she says. “They’re very human stories and so charming to work on.”

Animation can be a tricky medium for color graders, without the right tools

“Working in animation you get a lot of flat skies or flat fields underwater which lend themselves to a lot of banding when we get into home video formats,” Susan explains. A film may look perfect on a massive movie screen, but once you try to stream it on a phone or tablet in a more compressed format, it can lead to solid strips of color instead of smooth gradient transitions.

To avoid this, Susan and her Pixar coworkers rely heavily on Nucoda.

Animators use high-dynamic EXR files, which obviously can be huge and require the right processing software. Susan says that the DVO plugins, Nucoda’s suite of image processing filters, make a massive difference.

“We’re very dependent on and very grateful that we can work with multi-part EXRs and also the DVO plugins.”

In Luca there are three very distinct worlds the characters interact with: the human world in Italy, the imaginative world of the children, and the underwater world. “We spent a lot of time distinguishing these worlds — enhancing this imaginative world, and then transitioning back to the real world”, says Susan.

Each of these worlds provided its own challenges for the Studio Mastering team. “We’re dealing with a lot of the same hue and the same color values, so to pull a blue character out of a blue environment is incredibly hard,” says Susan. This is where those DVO plugins come in handy!

On Luca, which was Susan’s first film as Lead Colorist, she worked closely with the Director of Photography, Kim White. By the time she came on board for studio mastering, Kim had already been working with the files for over a year, which shows just how in-depth and detailed each frame is in an animation!

Together, the two of them collaborated on how they would deal with each of the sequences and transitions for each grade, from Standard Definition to High Dynamic Range.

For Susan, Nucoda’s ability to use multi-layer EXRs is life-changing

“Faces are incredibly important in an animated film, especially the eyes and the mouth. So we have shots that come in with mattes for the sclera, the iris, the pupil, and the eye highlight,” she explains. These shots need to all be pulled together seamlessly, which requires granular changes.

“In the past, we had to do a lot of keying and a lot of detailed work. We’re still doing that work but now we’re able to make those kinds of adjustments much quicker.”

The film industry has been revolutionized by technology, especially in the last decade. Cutting-edge software like Nucoda is changing jobs and letting editors tap into their own creativity — that’s why Susan thinks it’s so important to keep on top of the tech.

It’s hard to master everything when it’s constantly changing, but having a good handle of the best tools and software is essential.

Susan’s other piece of advice for budding post-production workers is to have a really strong understanding of storytelling.

“I think it is really important to have a solid understanding of how stories are told, how they are told with imagery, and how the image informs what is unfolding.”

“I’m surprised every time I work on a Pixar movie, that they have managed to create a new world,” she laughs. “It’s always surprising to me — and I’ve been there for over a decade!”

Get your hands on the same tools as Susan. Try Nucoda on a free X-day trial today.